Create an Account - Increase your productivity, customize your experience, and engage in information you care about.

The Athens community is using caring and commitment as tools to continue its fight against cancer.

The City of Athens Relay for Life Team announced it raised $12,500 for the American Cancer Society during the 2019-2020 campaign despite the inability to hold three of its main fundraisers during the COVID-19 pandemic. Team Captain Holly Hollman and team member Mayor Ronnie Marks presented a check to ACS Senior Community Development Manager Cherry Hammonds at City Hall.

“I was expecting $2,500 or $5,000 at the most because I know you were not able to do several of your fundraisers,” Hammonds said. “This shows what a great community you have in Athens and Limestone County.”

The City of Athens traditionally has a Relay for Life Team to support the efforts of the American Cancer Society and to support local cancer patients with medical-related travel expenses, wigs, scarves and support groups.

Based on available records, the City of Athens Relay for Life Team has raised over $174,000 for the American Cancer Society since 1999.

The team has started its 2020-2021 campaign and raised approximately $4,500 at its rescheduled Limestone Cattlemen's Steak Sandwich fundraiser. The team also worked with other Relay Teams in Limestone County to collect and distribute care baskets to local cancer treatment centers.

Catching a 'Spark' of kindness

Spark Academy at Cowart Elementary first graders who visited City Hall a few months ago asked how they can make a difference in their community. City of Athens Relay for Life Team Captain Holly Hollman told them the team collects cola tabs and along with Elkmont Church of Christ, sends them to Ronald McDonald House of Memphis. RMHM provides support for children and families who have a child undergoing treatment at St. Jude.

The first graders listened and acted! They collected 39 pounds of cola tabs by making marketing posters for their school. Their teachers also had them learn math. The students put the tabs in gallon bags and weighed them to count how many they collected.

The students presented the City of Athens Relay Team with their collection today, and they promised to keep up the good work. They know first hand the impact because one of the school's students currently goes to St. Jude for treatment and the family stays at Ronald McDonald House.

NOTE: The school delivered several more pounds of tabs at the start of the 2020-2021 school year. The tabs were collected prior to schools closing for COVID-19. We appreciate the students supporting our efforts!

City of Athens Relay for Life Events and Fundraisers

The City of Athens Relay for Life Team promotes education about treatments, research and prevention. The website http://www.cancer.org/ provides the latest information from the American Cancer Society.

We refuse to let cancer have the last word. Each year, the City Team celebrates victories won at the annual Relay for Life of Limestone County event, traditionally held in May. We cheer those participating in the Survivors Walk, encourage those still battling cancer, and thank those who are supporting our fundraising efforts.
If you are interested in honoring a loved one or supporting our team, please email Team Captain Holly Hollman at hhollman@athensal.us 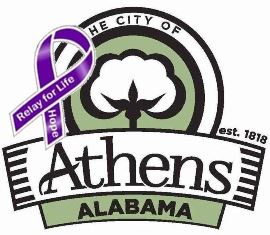 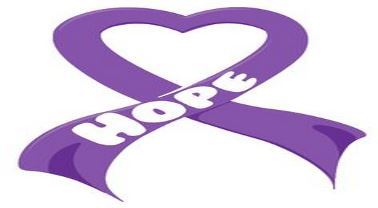